I’ll admit, I judge books by their covers. A lot of my beer purchases are made because of a cool label/logo/name. This is why I often overlook Green Flash’s beers. I’m well aware of the fact that they make great beers, but their presentation leaves a lot to be desired. I went against this thinking recently and picked up a four-pack of their new(ish) Double IPA. 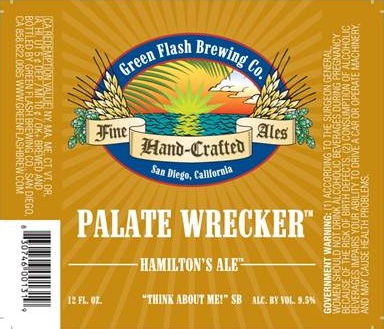 PALATE WRECKER is an Imperial IPA with a heavy 9.5% ABV and 100+ IBUs (brewmaster Chuck Silva says it’s somewhere around 149). 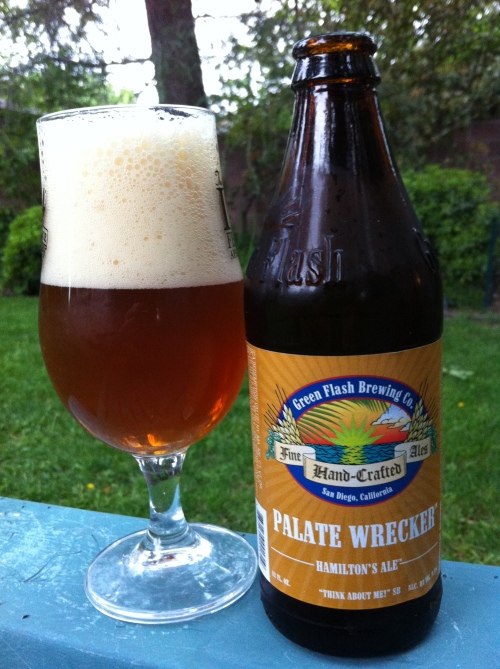 Palate Wrecker was originally brewed for the Hamilton’s Tavern 2nd Anniversary celebration. It’s the most complicated West Coast–inspired IPA we have ever brewed—mashing and sparging with hopped wort, in addition to our hop layering regimen for IPA. By popular demand, it is now released for the world to enjoy.

Palate Wrecker pours like a dictionary definition Double IPA. The body is a golden orange/copper color with a massive web of off-white foam. It looks like the seam foam you would see in a cluster of rocks off the San Diego shoreline. Lacing is prevalent and splashed all around the glass.

If I were to simply say that this beer smells like pine, that would be a perfectly apt description. To be more specific, I picked up pine needles, hop oil, pine cones, and wood. A touch of honey and cracker cuts into the pine forest-like ambiance the hops create.

These same flavors pop up again in the taste. Hop oil and pine cones come in big right off the bat. And I do mean BIG. Some cigar and wood notes come through near the end. Hints of toffee show up here and there, but it is overwhelmed by the hops and never really gets a chance to make itself that known.

Mouthfeel is light-to-medium and very typical of the DIPA style. There’s a ton of stickiness that dries out your mouth and clings to your throat the whole way down. Abrasive is a very appropriate term for the body of this beer.

The name Palate Wrecker is very apropos. Everything about this beer says “I’m a big, brash, in-your-face Imperial IPA” and whether or not that’s a good thing depends on your tastes. I love a huge DIPA as much as the next guy, but I also don’t like to feel like I’m being punished by my beer. I can only blame myself though, what did I expect from a beer with such a foreboding name?